Hi all, so here’s what’s happened. I met a man at Palm Beach Hotel Gambia. We were planning on getting married in Gambia but I wanted him to come over on a visitor’s visa first. Paid to have the paperwork done, then to be told by Assan Tamba that the lady who was doing the visa was sending me an email straight away. In it she said Assan had brought into the office documents saying that he had been married but was divorced. But he had told her they were forged and had been paid for on the black market, as he had wanted to come to the UK previously. (It turned out that he was refused on the grounds of not having the income to support his wife while over here for the month he had requested) this was before we met. But he hadn’t told me any of it. I phoned him and said it was over. He cried, pleaded with me to go on Skype to talk. So I did. He pleaded with me not to tell his mom. I told him he was not me! After having a friend involved also talking to the family on my behalf as Assan Tamba had said he would be beaten all was settled. 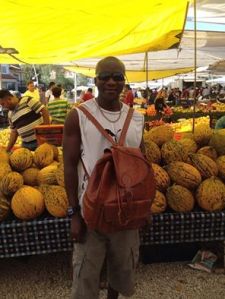 So it was back on with us. We planned for me to go over 18th June 2013. Register office said you needed to be in the country 14 days before you can wed. (Then asked if we wanted to do it next day). We married on 26th June 2013. It was to be us and witnesses (no there was about 200 or more) I had met about a handful before. I paid for everything you can think of, including the rental we stayed in for a month (I also continued to pay for it when I came back until the November, as I needed as much money in the bank for Assans visa). The day before coming back to UK I was sorting out some of the paper work that I had brought with me for Assan’s visa and asked for some other documents including the previous marriage ones, only to find that there was a document stating that Assan had only registered the divorce in the April 2013, 8 weeks before we married! Yes alarm bells should have rung then.
I came home and kept paying to send Assan to do the “ENGLISH Entrance exam” he got conned at one place to do City and Guilds, then failed two more at different places then finally passing a city and Guilds at different place. (Also my own father had disowned me for both marrying a Muslim and that he were younger. He sent me an email the day we married confirming it and that he had been and changed his WILL. ) that was his choice!
My mother had died and left me £4,000 which was mostly used for the wedding, appointments, documents post cost to send them, money for Assan to have a phone, to live on, clothes there, his gran, his mom ( she lives in Senagal )and the time I was there , my flight so on.
Came back, got MP to support Assan coming over (he had been involved in a taxi accident as a passenger I didn’t know at the time. This was December 2013. After a week he was having fits in GAMBIA some friends from UK paid for treatment and medication.
Assan Tamba came here in February 2014. He was a different person straight away! I would say, where’s your smile gone ( he had a lovely smile, very very polite, charming, very clean, always wears aftershave and smartly dressed) when here he remained polite, and dressed nice and the rest of it when he was going out, even jogging.